Once you go to Asia you have to go back at some point. This time the flight was with Alitalia’s Skyteam partner KLM.

What did we get 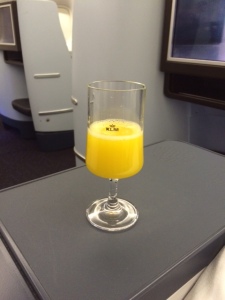 FIrst of course some welcoming orange juice. You can also select Champagne or water.

Just after take off a small aperitif. Gin Tonic and some nuts. 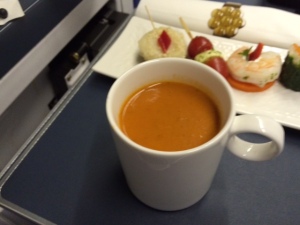 As I did not want to go for the complete menu, du to the fact that the flight departed after 11pm, I selected the “Quick Option”: A cup of tamato soup together with some European styled snacks. Cucumber filler with cheese cream, shrimp served on tomato, tomato-mozzarella stick with pesto and sesame covered stemed fish. Very nice alltogether and not heavy on the belly.

But I did succumb to the dessert. Chocolate cake and a “Streuselkuchen” served with red fruit coulis.

Just before landing typical European breakfast. CInnamon pinwheel, fruit, cheese, yoghurt and bread… As usual I stayed away from that. Once again no good bread up in the air. 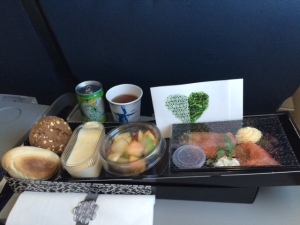 As one breakfast was not enough. On the second flight from AMS to FRA a second breakfast was served. This time with smoked salmon and vanilla yoghurt. Very good meal indeed… as usual I did not go for the served bread.

Very nice combination served on board of KLM. Also a got idea to include a light dinner option as the flight was taking off very late. All in all very good service on KLM.