It has been very long since the last post on Airline food so it was time to do a new one. And what better than evaluating a complete menu for a very long transcontinental flight. Well actually two flights as we travelled from Osaka-Kansai Airport to Barcelona having a layover in Istanbul. So here we go:

What did we get: 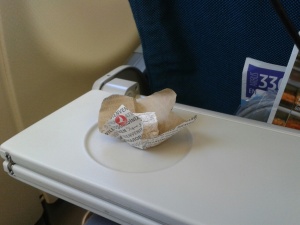 Just after take-off we were served some Turkish delights. Very nice way to start a flight with a Turkish Airline

After some time dinner was served (The flight departed in the evening). We were able to choose between two main courses: 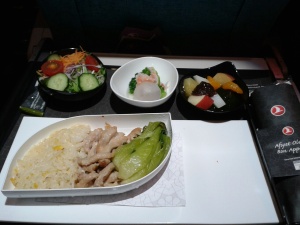 We went for the chicken. It was quite nice. The garlic somewhat dominated in the taste but overall it was ok. The side dishes were fine and well served. As dessert some diced fruit with some nice jelly. Light and adequate before going to sleep.

As the first flight was taking place during the night. Turkish Airlines offered some ‘anytime’ midnight snacks:

After sleeping some hours… Midnight snack here we come. The desire for sweet and chocolate took over and this is why we fell for the brownie…And it was very good. Spongy,  a good balance between chocolate and nuts. So perfect for all midnight-sweetness addicts.

Before landing the last course was meal was served: Breakfast. 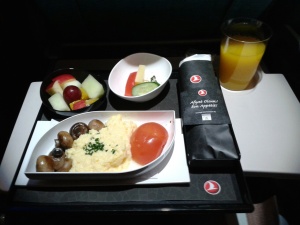 Again we could choose from two options:

This time we went for the first option with the scrambled eggs. Usually one would complain that they were ‘just warmed up’ scrambled eggs but in this case we have to admit they were quite nice. The sides: bread-roll with marmalade and fruit salad were ok too, nothing to complain.

So this flight started in the morning so again some time for breakfast. As it was a rather short flight, this time no choices. Just one meal:

The Turkish are known for their dairy products so the yoghurt with muesli perfect. Also the salty dish (cheese and vegetables) as well as the main course (scrambled eggs with spinach pastry and grilled tomato) were excellent. The only thing to complain was the bread-roll which was kind of dry and even with a lot of jam and butter hard to eat.