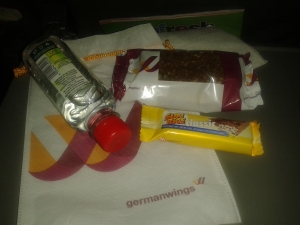 What did we get:

4th of April. Day 3 of the Lufthansa-pilot strike. They cancelled my flight to Frankfurt. That is why I was re-routed to Stuttgart with Lufthansa affiliate Germanwings. Usually on Germanwings, being a low-costa carrier, you will find food only for purchase. Nevertheless, this time each passanger got a little snack box featuring a whole-grain cream cheese sandwich, a puffed rice chocolate bar and a bottle of water. Sandwich was ok- a little bit dry, but the cream cheese had a nice sour taste. Definitely the chocolate bar was nicer, creamy chocolate and crunchy rice. (Who does not like some chocolate treat after they cancelled your scheduled flight and re-routed you to some other airport?)